Yes this recent case shows what happens when HR is on a power-trip.  Yes, this includes snarky e-mails from HR.

The employer terminated the employment of an information technology manager after he went on vacation to Mexico during the final two weeks of a paid medical leave to recover from foot surgery. The employee sued and a jury found the employer was liable for a retaliatory termination in violation of the Family and Medical Leave Act (FMLA) and the Americans with Disabilities Act (ADA).

This case involved a manager in the information technology department, who received positive performance evaluations and had no disciplinary history. The employee informed the human resources department (HR) by e-mail that he was postponing a previously scheduled knee surgery and instead planning to take FMLA leave to have an operation on his foot. Based on information received from his surgeon, the employee estimated that he would need to take FMLA leave during his 7-week recovery period because his surgeon had told him that the recovery is 3-4 weeks but he will not be able to drive as he would have a boot on his foot for an additional 3-4 weeks.

The employee provided HR with an FMLA application form completed by his surgeon. In the form, the surgeon twice explained that the employee would be able to "transition" to putting weight on his right foot after four weeks.

Additionally, the surgeon estimated that the employee would be out of work 4-6 weeks from the date of surgery. The director of HR relied on this form when approving the employee’s FMLA leave.

The employee had his foot surgery as scheduled. A few weeks later, he informed the employer that he hoped to return to work early because he could walk around a little without crutches and was planning to drive his car using his left foot. The employee had returned to work early from previous FMLA leaves, and his hope was to do so in this case as well in order to avoid exhausting his allotted vacation leave time. HR told the employee, however, that he could not return to work without written permission from his doctor. Not only did the employee fail to provide a doctor’s release, he actually submitted a follow-up FMLA leave application signed by his surgeon requesting an additional week of FMLA leave.

When the employee determined that he would exhaust his sick time and vacation time before returning to work due to his inability to return, he spoke to a manager in HR about the employer’s “salary continuation” policy for providing pay to managers who took FMLA leave due to a serious health condition that prevents the employee from performing job requirements.

Based on the FMLA forms completed by The employee’s physician, the HR manager concluded that The employee should be approved to receive “salary continuation” benefits while on his FMLA leave.

During his FMLA leave, the employee went on a vacation to a beach in Mexico with his family. The employee took this trip every year, had booked the travel arrangements well in advance, and had informed his supervisor of the dates of his vacation on multiple occasions. Due to his medical condition, the employee stated that he limited the typical activities in which he engaged while on vacation. At trial, the employer introduced photographs of the employee standing on a boat fishing, including one photograph where he was proudly holding a large fish he had caught, to impeach the employee's testimony about his lack of mobility. However, the employer did not possess these photographs when it reached its termination decision.

After his vacation, the employee contacted HR because his paycheck did not reflect the salary continuation benefits that HR had told him he would receive should he exhaust his allocated sick days and vacation days while on unpaid FMLA leave. HR subsequently provided the employee with $4,614.22 in salary continuation payments. The employee went back to work, and sent an e-mail message to HR asking for a copy of the salary continuation policy so that he would not encounter any “surprises” about using the policy when he took FMLA leave for his previously postponed knee surgery. The director of HR forwarded the employee’s e-mail message to an HR manager with the message “is he serious,” to which the manager responded “OMG.”

Despite this and other requests, HR did not provide the employee with a copy of the salary continuation policy prior to his termination.

The same day as this e-mail exchange, HR learned that the employee had gone on vacation to Mexico while on FMLA leave and receiving salary continuation. The director of HR  immediately launched an investigation into the propriety of the employee’s leave because she did not think an employee “who’s seriously ill or disabled would be able to be on a vacation.”  In the course of her investigation, the HR director obtained video recordings that depicted the employee walking, driving, and lifting luggage out of his car at the employer’s property on his FMLA leave. The director of HR believed that these actions were inconsistent with the medical conditions for which the employee had been granted FMLA leave and received salary continuation benefits.

Immediately following the interview, the interviewers reported to employer senior management that the employee had lied to them about the medical conditions for which he had received FMLA leave and salary continuation benefits and recommended his termination. The interviewers did not, however, present the FMLA leave forms to senior management. Based on the report of the interview, the employer’s executive director, with the agreement of the other senior managers, decided to terminate the employee’s employment. The director of HR sent the employee a termination letter, informing him that his employment was terminated due to misrepresentation that he was unable to work during his vacation, his receipt of extended salary continuation pay to which he was not entitled, and his failure to be truthful during his interview concerning these matters.

The employee sued his employer under the FMLA and the ADA.  Following trial, the jury returned a verdict in the employee’s favor on his claims that the employer had terminated him in retaliation for his taking FMLA leave for his foot surgery and expressing his intention to take FMLA leave in the future. The judge and jury awarded $2 million in damages. The case was DaPrato v. MA Water Resources Authority, SJC-12651 (June 5, 2019).

After trial, the employer filed various motions requiring the court to issue an order. In that order, the court explained that this employee took FMLA leave to allow his foot to recover fully from surgery. Such recovery could take place in a warm climate. “That being said, vacationing while on FMLA leave may take either permissible or impermissible forms. An employee recovering from a leg injury may sit with his or her leg raised by the sea shore while fully complying with FMLA leave requirements but may not climb Machu Picchu without abusing the FMLA process.”

The judge explained that careful consideration of the reasons for the medical leave and the activities undertaken, including the timeline for rehabilitation and recovery, are required to determine whether FMLA leave has been abused. In this case, the employee’s fishing trip raised legitimate questions: he is seen in photographs standing on a boat and holding a large fish that apparently he had reeled in himself at a time when he was supposedly still recovering from foot surgery. In this context, the photograph was evidence that the employee may not have been entirely truthful about the state of his injury and his need for FMLA leave.

Nevertheless, the employer did not have the photographs when reaching its termination decision. It did not know what he did on vacation in Mexico, just that he had gone on vacation to Mexico. The HR director’s statement that she considered all vacations while on FMLA leave impermissible was incorrect as a matter of law. Importantly, the employee’s FMLA leave certification forms described his foot as steadily recovering, with weight bearing allowed, indicating he could engage in some activity on vacation.

The court let stand the award of punitive damages, explaining that the jury reasonably could have found the manner in which the employer treated a long-time employee with no prior history of misconduct to be egregious or recklessly indifferent. The jury could have found that the employer was recklessly indifferent because the employee’s conduct was not inconsistent with the recovery time frame described in the FMLA application.

Also, the employer’s HR director never presented this information to senior management when recommending termination. She also seemed unaware that an employee could be on vacation and still be eligible for FMLA leave, so long as the activity on vacation was consistent with the reasons for the FMLA leave.

Furthermore, the jury could have found that the employer demonstrated hostility in the internal e-mail messages responding to the employee's request for FMLA leave and the manner in which it conducted its investigatory interview of the employee.

It was determined to be within the judge’s discretion to conclude that in the employment discrimination context, if there is to be a windfall, such benefit should accrue to the injured party rather than to the wrongdoer.

This case demonstrates how important the role of HR is and how an untrained HR professional can cost an employer a lot of money. This is a great example of why employers should allow HR professionals to have access to regular training in their field of HR.

If you need any assistance in handling FMLA matters, or discrimination issues concerning your Florida business or if you need guidance in any employment policies, please promptly email the Law Office of David Miklas, P.A. or call us at 1-772-465-5111. 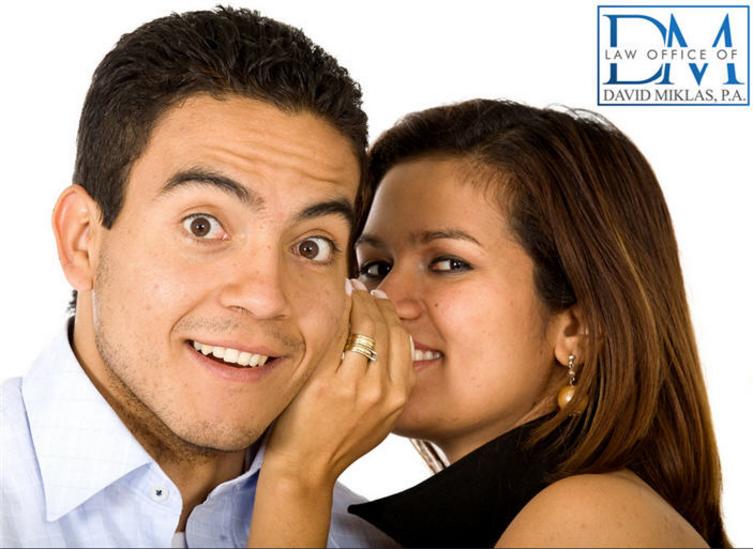 How an HR professional with a God-complex created legal liability for an employer.