After working for an employer for several months, an employee began experiencing chest pains and went to the emergency room, fearing she was having a heart attack. After two days of treatment the employee learned her chest pain had been the result of a panic attack. She reported back to work a few days later, but she began experiencing a panic attack and left work, after emailing her supervisor. When she returned to work a few days later, she met with two supervisors, where she was told that “it was not working out” due to her health problems and that she needed to take care of herself, at which time she was terminated.

The employee filed a charge of discrimination with the EEOC, and the EEOC found cause to believe that the employer violated the Americans with Disabilities Act (ADA).  When the employer refused to settle the case for what the EEOC was demanding, the EEOC decided to make an example of this business.  The EEOC filed a lawsuit in federal court, Civil Action No. 4:17-cv-627-JLH.

The ADA prohibits discrimination against a qualified individual with a disability because of the disability.

The EEOC’s position was that when she attempted to communicate her medical conditions to her supervisors, the employer refused to discuss accommodation options with the employee.  Essentially, the company refused to provide a medical leave of absence as an accommodation to an employee who suffered from anxiety and depression and then fired her because of her disability within days of learning of her disabilities.

The employer claimed that the employee was not disabled.  Under the ADA, a person is disabled if he or she has “a physical or mental impairment that substantially limits one or more major life activities.” Before the 2008 amendments to the ADA, courts strictly interpreted the terms “major life activities” and “substantially limits,” which created a demanding standard for an employee to qualify as disabled. The 2008 amendments, however, broadened the definition of what constitutes a disability and rejected the strict standards from before. Now “substantially limits” is not demanding, and the regulations interpreting the ADA state that it “shall be construed broadly in favor of expansive coverage.”

In this case, it was undisputed that the employee was diagnosed with anxiety, depression, and panic attacks. Her panic attacks make her feel paralyzed, cause chest pain, and cause difficulty with her breathing, thinking, communicating with others, and reasoning. Her anxiety causes her to have difficulty breathing and communicating and an inability to think coherently.  When she suffers from depression, she is unable to care for herself, communicate with others, or think coherently.

The company was not done yet.  It argued that the EEOC had no direct evidence of discrimination, and under the McDonnell-Douglas framework required for circumstantial evidence, the disability claim cannot survive.

As a reminder, three things may all constitute direct evidence of discrimination: 1) an employer’s actions or remarks that reflect a discriminatory attitude, or 2) comments that demonstrate a discriminatory animus in the decisional process, or 3) comments made by individuals closely involved in employment decisions.

In contrast, things that do not constitute direct evidence are 1) stray remarks in the workplace, 2) statements by non-decisionmakers, and 3) statements by decisionmakers unrelated to the decisional process. Likewise, if employer comments are made with the intent of attempting to preserve and promote an employee, they are less likely to constitute direct evidence of a discriminatory animus.

Here, the employee met with two supervisors in order to discuss why she had left work early a few days earlier. Instead, she was fired. The employee testified that at this meeting, a supervisor told her that “due to [her] health, it wasn’t going to work out and [she] should take time for [her]self.”  The Court ruled that this comment is direct evidence of discrimination.

In a ruling before trial, the court explained that if a jury found that the employee was disabled, and it believed these facts, it could draw the inference that an illegitimate criterion – her disability – actually motivated her firing.

The Court rejected the employer’s argument, and even went so far as to state that the supervisor’s comment is a far cry from “stray remarks in the workplace, statements by non-decisionmakers, and statements by decisionmakers unrelated to the decisional process.”

Instead, the comment was made during the meeting in which the employee was fired, it was made by the employee’s supervisor, and it relates directly to the decision to fire the employee.

Thus, the court determined that the EEOC had presented direct evidence of discrimination sufficient to take the case to the jury.

The employer had spent a lot of money on its lawyers litigating this case in federal court for two years, and after receiving this ruling from the Court, the employer promptly settled the case by paying the employee $27,100.

In addition to paying this money, the employer also agreed to:

- review and revise its written policy prohibiting disability discrimination, to ensure that the policy specifically explains the process by which an employee requests a reasonable accommodation;

- disseminate a copy of the policy to all employees;

- within 90 days of entry of the decree, have all employees sign and acknowledge receipt of the revised policy; and

- train all managers at its corporate office and at its dealerships on disability discrimination and reasonable accommodation.

An EEOC district director connected with this case warned employers to ascertain whether their employment handbooks are updated so that supervisors, managers, and employees know what the ADA requires.

Florida HR professionals and business owners should take away two things from this case: 1) the importance of training managers; and 2) the cost of failing to update the employee handbook.  In addition to the $27,100 being paid to the employee, the employer most likely spent over $50,000 to its law firm to defend the EEOC investigation and lawsuit.

This case is another example where Florida employers can learn a lesson.  If your Florida business is using an old employee handbook, or has not had it reviewed by a lawyer in the past year or two, it may contain illegal language.  There is language that can be inserted into your company’s employee handbook that addresses reasonable accommodations, as required by law, for the known physical or mental disabilities of an otherwise qualified applicant or employee, as well as accommodating sincerely-held religious beliefs.

If your Florida business wants to revamp its employee handbook, now is the time. 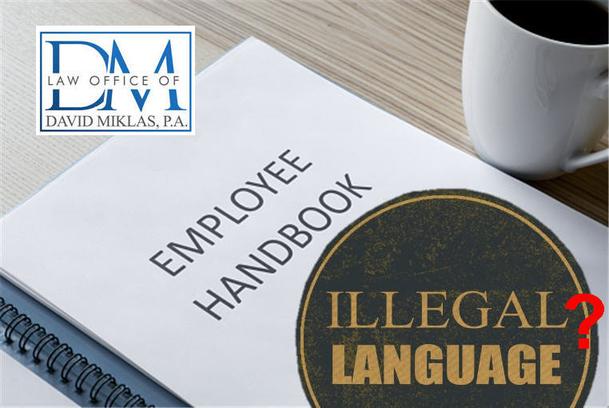