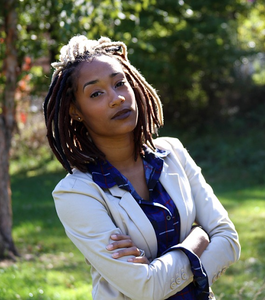 A black job applicant interviewed for a vacant position dressed in a blue business suit and wearing her hair in short dreadlocks.  The white human resources (HR) manager, informed the applicant that she had been hired, but the employer could not hire her “with the dreadlocks” because “they tend to get messy, although I’m not saying yours are, but you know what I’m talking about.” The HR manager told the applicant about a male applicant who was also asked to cut off his dreadlocks in order to obtain a job with the employer. The female applicant said that she would not cut her hair, and her offer of employment was rescinded by the employer.

At the time, the employer had a race-neutral grooming policy which read as follows: “All personnel are expected to be dressed and groomed in a manner that projects a professional and businesslike image while adhering to company and industry standards and/or guidelines. . . . [H]airstyle should reflect a business/professional image. No excessive hairstyles or unusual colors are acceptable[.]”

The Equal Employment Opportunity Commission (EEOC) sued the employer on behalf of the applicant, alleging that the employer’s conduct constituted discrimination on the basis of race in violation of Title VII of the Civil Rights Act of 1964.  EEOC v. Catastrophe Mgmt. Solutions, No. 14-13482, 2016 U.S. App. LEXIS 16918 (11th Cir. Sep. 15, 2016). The EEOC argued that dreadlocks are a method of hair styling suitable for the texture of black hair and are culturally associated with black persons, thus supporting a race discrimination claim.  The lower court (district court) dismissed the lawsuit.

The EEOC appealed, and the 11th Circuit Court of Appeals, controlling in Florida, agreed with the district court.  The Appellate Court rejected the EEOC’s claim, explaining that Title VII prohibits discrimination based on immutable traits, i.e., those that an employee is born with or cannot change, and the lawsuit claimed that dreadlocks were culturally associated with race, but did not claim that dreadlocks were an immutable characteristic of black persons. The Appellate Court cautioned employers that “the distinction between immutable and mutable characteristics of race can sometimes be a fine (and difficult) one… So, for example, discrimination on the basis of black hair texture (an immutable characteristic) is prohibited by Title VII, while adverse action on the basis of black hairstyle (a mutable choice) is not.”

Employers are cautioned that a similar factual scenario may result in a lawsuit being permitted to go forward if the applicant/employee claims that the race-neutral grooming policy had a disparate impact on a protected race, even if there was no intention to discriminate.

On December 5, 2017 the Eleventh Circuit Court of Appeals declined to reconsider as a full court its ruling in this case.  In a special concurrance, Judge Jordan explained, "The panel here was not tasked with addressing whether [the employer's] grooming policy is enlightened, or whether it makes sense in our multicultural and evolving society."  EEOC v. Catastrophe Mgmt. Sols., No. 14-13482, 2017 U.S. App. LEXIS 24533, at *6 (11th Cir. Dec. 5, 2017)

If you are a Florida HR director and you are unsure of language in your employee handbook, please call the Law Office of David Miklas, P.A. at 1-772-465-5111 or email us.