In Florida, when interviewing an applicant for a vacant position, it makes sense to document the responses that the applicant gives, right?

In fact, many Florida employers rank applicants so they can remember who are the top candidates.  Well, these notes can actually be used against the employer to help an employee sue the employer for employment discrimination.  Here is an example:

An employee filed a Title VII race discrimination claim against his employer.  After his lawsuit settled, he applied approximately 26 times for positions with the employer but only received an interview for a clerk position.  The interview panel ranked him fourth out of all the candidates and recommended him for hire. However, he did not receive an offer, even though four candidates ranked below him did.

The applicant sued again, this time bringing a Title VII retaliation claim for not being hired.  Calvert v. Doe, 2016 U.S. App. LEXIS 7413 (11th Cir. Apr. 25, 2016). The employer moved for summary judgment, which was granted at the lower level, but was reversed on appeal.  The 11th Circuit Court of Appeals (controlling in Florida) determined that the applicant presented circumstantial evidence that created a triable issue concerning the employer’s discriminatory intent, and that was adequate to prevent summary judgment being granted for the employer. The appellate court determined that the applicant established “a convincing mosaic of circumstantial evidence that would permit a jury to infer that the employer retaliated against him because of his previous lawsuit.”

The appellate court relied on evidence that the human resources coordinator sent the final decision-maker an email between the applicant’s interview and the sending out of job offers. The email informed the decision-maker that the applicant had been fired by the employer before, which was the event that led to his prior Title VII lawsuit.  The decision-maker testified that she decided not to hire the applicant because he kept calling, demanding to be hired.  In addition to this evidence, there was an unexplained asterisk and the word “skip” written next to the applicant’s name on the interview score sheet and recommendation form. The human resources coordinator admitted she wrote the word “skip” next to the applicant’s name on the score sheet, but claimed she did not remember why she wrote it. The appellate court ruled that this evidence, combined with the fact that the applicant was not hired despite scoring within the top four candidates, created a triable issue concerning the employer’s discriminatory intent.

This case reminds employers of how notations made during the hiring process can be used against the employer.  Some Florida business owners are unaware of the discrimination laws.  Some Florida businesses do not have an experienced Human Resources professional.  This is the type of situation where the Florida company should consider consulting with an experienced employment lawyer.  If you have questions about hiring or retaliation, please call our firm at 1-772-465-5111 or you can email our firm for Employment law assistance for your Florida business. 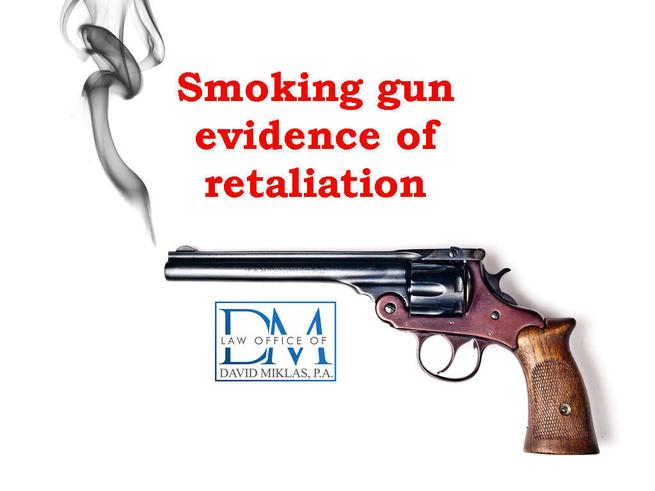